The most critical matter for resource speculators to get right today is whether the US and global economies are headed for inflation or deflation.

After yesterday’s higher-than-expected CPI numbers, this may seem moot, but it’s not. Factors such as the high price of used cars—which I agree won’t last—are keeping the “transitory” yarn going, even if badly frayed.

Long-time readers know I’ve been vocal on the inflation side for some time.

But what if I’m wrong?

There are a lot of smart people calling for deflation—even among fiscal conservatives who don’t approve of government profligacy any more than I do.

Economist Lacy Hunt is one of the more credible examples.

Perhaps that’s why so many readers keep asking about deflation.

I have to admit that it is disturbing.

But as much as I respect Dr. Hunt, it’s not the weight of authority that concerns me. Independent speculators need to make their own judgment calls. The successful ones have the intestinal fortitude to see them through.

No. What’s troubling is how much sense many of these arguments make.

After all, I agree that easy money isn’t the same thing as economic strength. I think there is going to be a great and enduring economic price to pay for shutting the global economy down in 2020. The magnitude of the damage won’t be clear until after the post-lockdown surges pass. We’ll see then what level things settle down to.

A lingering recession—even Doug Casey’s long-predicted Greater Depression—is not out of the question.

And wouldn’t that be deflationary?

Won’t larger numbers of folks out of work tend to push prices down?

Before we answer these questions, let’s first define the terms.

I agree with Milton Friedman’s statement that inflation is “always and everywhere a monetary phenomenon.” At heart, inflation is derived from money supply, making the explicit term “monetary inflation” somewhat redundant.

It is, however, a necessary redundancy. The advent of fractional reserve banking and the abandonment of hard money generations ago make the “velocity of money” as powerful an economic force as money supply. Or, it does as long as money supply is relatively stable.

(In saying so, I’ve been reminded of Austrian School criticisms of the highly metaphoric concept of “velocity” of money. But I do think the term is descriptive of something we see in economies that have abandoned hard money and embraced fractional reserve banking.)

We’ve seen the insufficiency of strict money supply as an explainer for inflation amply demonstrated since 2008.

Increasing money supply and falling velocity of money canceled each other out to a large degree, resulting in relatively low consumer price inflation—until now.

And to be fair, that other definition of inflation—higher consumer prices—is the one most people care about. It’s what they react to. It impacts how they vote.

Thus, it’s no surprise that politicians and their minions focus on this aspect. They place the greatest emphasis on the Consumer Price Index (CPI) and Personal Consumption Expenditure (CPE) reports (or “misreports,” as the case may be). Consumer prices and expenditures are where the rubber hits the road for The Powers That Be (TPTB).

Now, back to our critical question…

Based on a strictly monetary definition, there won’t be any deflation, even if the economy slips into a bona fide depression. The government would have to cancel fiat currency units for that to happen. It’s a near certainty that it will do the opposite; print more money to try to make the pain go away.

But if the velocity of money falls faster than the money supply increases, there could, in theory, be considerable consumer price deflation, even in the face of monetary inflation.

I think this is very unlikely.

At the end of the day, the printing press has no limits, while the velocity of money can only drop to zero.

But if velocity of money did drop to zero, it would imply the end of fractional reserve banking, which is an “end of the world” scenario for TPTB.

A more realistic scenario would be a post-2008 style period of “disinflation.” This refers to a reduction in the amount of inflation, not actual deflation. (Many who warn of impending deflation seem to conflate these two different things.) This could happen, especially if economic woes send Wall Street into a prolonged bear market and industrial output falls.

Indeed, why should commodity prices rise in such an environment?

Well, the fact is that commodities did rise in such an environment—after the crash of 2008. They soared for three years and remained elevated until mid-2014. 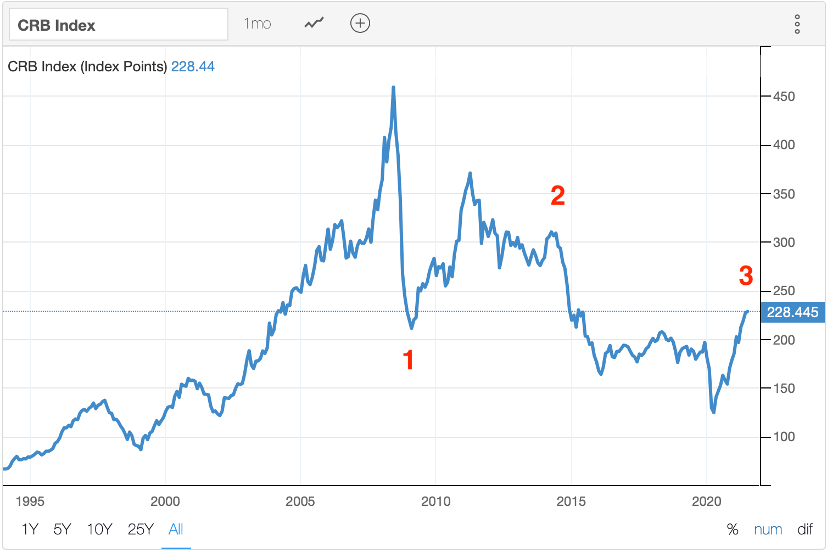 Point 1 on this Thompson/Reuters Core Commodities Index chart is the Crash of 2008. Point 2 is when the period of historically elevated prices ended in June of 2014. Point 3 is where we are now—just barely recovering from grossly oversold to levels similar to the bottom of the global financial crisis of 2008.

I think Friedman nailed this one: behind all the smoke and mirrors, the post-2008 commodities rally was a response to monetary policy.

If we were still in a hard-money economy, an economic downturn that results in little monetary inflation and reduced velocity of money would likely see consumer prices fall.

But today, we have a fiat-money economy with fractional reserve banking. There are derivatives on derivatives on derivatives. And, especially important now; there’s no fiscal restraint. In such conditions, economic downturns can result in huge monetary inflation. Reduced velocity of money can counteract this for a time. Some assets and consumer prices may see some disinflation, but that’s not deflation. And if policy—especially fiscal policy—stimulates velocity of money while money supply is increasing, there’s no counteracting force.

What happens if governments decide that The People (voters) are suffering—“through no fault of their own”—due to lockdown-induced hardships, and “something must be done!” thinking takes over?

Monetary and fiscal policy could increase both the supply and velocity of money, creating persistent high consumer price inflation.

We call it stagflation.

The change in the velocity of money—the disappearance of the counterweight to monetary inflation—is the scenario I think Hunt and other smart folks in the deflation camp are underestimating.

As for the easy-money cheerleaders, they don’t even admit that an economic downturn is a concern. They take decades of low CPI inflation as proof that there’s no need to worry about the economy overheating.

Just print more—everything will be fine.

It’s as though the 1970s never happened in whatever world these people imagine themselves to live in.

But we have seen stagflation before. It’s a mistake to dismiss the possibility.

I think we’re going to see it again, in spades.

I think I am, of course, or I would change my tune. But without a time machine, none of us can really know what the future will bring.

We all have to make up our own minds…

To help you with that, let me ask you:

When was the last time you saw your cost of living go down?

I can’t recall a landlord ever telling me the rent was going down.

I don’t think I’ve ever gone into a food store and thought, “Wow, food keeps getting cheaper…”

TPTB keep saying there’s no inflation and that deflation is the dread scourge to fear. In fact, the “no inflation” for decades meme is untrue. The reality is simply less inflation than TPTB say there should be.

I’m not aware of any place on the planet where the real cost of living has fallen materially over any significant length of time—not since the end of the gold standard.

I just don’t believe in the deflation boogeyman… but I do see signs of inflation all around me.

That’s why I’m happy to be long commodities.

That’s why I just bought another gold stock.

This—plus the uncertainty in the markets—are why I set a low entry point and waited for the market to come to me on it. It took almost a month, but I got my order filled during the big dip in gold prices last Thursday. This disciplined approach to “making volatility your friend,” as Doug Casey taught me, is how I’ve gone about building a portfolio of great gold, silver, copper, oil, and other stocks.

And I intend to buy more whenever the market comes to me on a compelling value proposition.

Which stocks? Well, as above, access to the portfolio I’m putting my own money into is what The Independent Speculator clients pay for.

But I will give you a yardstick you can use:

The better projects and mines can deliver for shareholders at $1,500 gold, $20 silver, and $3 copper, among other prices well below spot today.

Due diligence is required, but companies with quality assets don’t need higher prices to deliver big wins. They just need to keep doing what they’re doing, and reality will assert itself in due course.

But I do expect higher metals prices, of course.

These companies can deliver even better in such an environment of rising prices—but they are less risky than gambling on the ones that can’t deliver at lower prices.

Uranium is the exception here.

All but a very few uranium miners need much higher prices in order to become viable businesses. And even the few that can make money today won’t be able to do so indefinitely. Costs continue rising and their lowest-cost mines are depleting.

But I see this as good news. It means that, absent a serious nuclear disaster, uranium prices must rise.

I expect spot uranium prices to double at the very least—and they may spike to a much higher multiple.

And when that happens, I expect the best stocks in this space to soar.

P.S. To be kept abreast of more dangers, opportunities, and issues affecting investors, please sign up for our free, no-spam, weekly Speculator’s Digest.